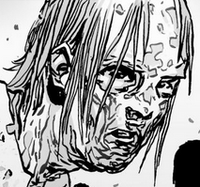 The Whisperers are a human survival group that operated out of Virginia, close to the Washington, D.C. area. Unlike other groups, the Whisperers did not actively combat roamers. In fact, they lived amongst them, disguising themselves with treated zombie skin, which they wore as masks as well as clothing remnants. Because they smelled like the dead, the roamers basically left them alone. The leader of the Whisperers was a bald woman named Alpha. The Whisperers came into conflict with other human settlements, beginning with Hilltop Colony. A colonist named Dante, was one of the first to encounter them. When Alpha made her presence known, she succeeded in capturing Rick Grimes. The Whisperers killed many people from Hilltop, as well as the Alexandria Safe-Zone, the Kingdom, and Oceanside. Alpha's victims included Ezekiel, Rosita Espinosa, and Olivia. Rick's adversary, Negan, infiltrated the Whisperers' camp and killed Alpha by slicing her throat open. He beheaded the corpse and brought it back to Rick in Alexandria as a show of good faith. Alpha's second-in-command, Beta, took over as leader of the group and thus began The Whisperer War.

The Whisperers make their live-action debut in the season nine episode "Who Are You Now?" where they pursue Eugene Porter and Rosita through the woods while they are on a mission to the radio tower. The Whisperers later attack the group set out to rescue Eugene in a cemetery where Jesus is fatally wounded by a Whisperer that stabs him in the back. Later, a group of Whisperers is ambushed by Michonne and Daryl Dixon who take one of them, a young girl named Lydia, captive for questioning at Hilltop. Lydia forms a bond with Henry who has also been locked up and gives him information which is overheard by Daryl. The Whisperers eventually take Lydia back in exchange for Alden and Luke while Henry is captured trying to rescue Lydia due to her physical abuse at the hands of Alpha, revealed to be her mother. The pair are rescued by Daryl and Connie, managing to fend off Beta when he comes to hunt down Lydia. Later, Alpha infiltrates the fair under the guise of an Alexandria member and after threatening Daryl with a herd of walkers should they ever invade their border again, Michonne, Daryl, Carol Peletier, Yumiko and Siddiq discover the decapitated heads of Tara Chambler, Enid, Henry, Tammy Rose, D.J., Ozzy, Alek, Addy, Frankie and Rodney placed on pikes along the border.

In season ten, Carol and Negan work together to kill Alpha as part of a deal to help Negan integrate himself within the community by earning their trust with Negan spending days trying to earn Alpha's trust in order to be able to get her alone. Negan slits Alpha's throat and decapitates her but he is unable to show Daryl the proof as Beta takes the zombified head around with him before stabbing it in the head and using part of Alpha's face to sew onto the part of his mask that was ripped off by Gamma.

Retrieved from "https://headhuntershorrorhouse.fandom.com/wiki/Whisperers?oldid=252033"
Community content is available under CC-BY-SA unless otherwise noted.