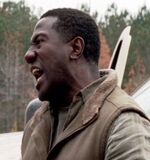 Paul was an African American male, who appeared to be in his late thirties or early forties. He was a survivor of the zombie outbreak and took up residence in the town of Woodbury, which was under the leadership of a man known as the Governor. Paul served as one of the Governor's soldiers and was one of those who accompanied the Governor on a massive assault on the West Georgia Correctional Facility. After the group was forced to retreat, they stopped to rest, at which point several of the Woodbury residents, including Paul, expressed their displeasure of being manipulated into killing people. Enraged by this seeming act of betrayal, the Governor opened fire on the dissenters with an assault rifle. Paul was one of those who was shot and killed. (WD: Welcome to the Tombs)

Paul Monroe was a human survivor of the zombie apocalypse. More commonly known as "Jesus", he came to be a part of the Hilltop Colony group. He encountered Rick Grimes, who mistrusted him at first, but eventually became a vital ally in Rick and his group's battles against oppressive threats such as the Saviors and the Whisperers. Paul divided his time between Hilltop and the Alexandria Safe-Zone. A homosexual man, he had a relationship with a man named Alex. His quick wits and strategical mind proved to be a tremendous benefit when he rescued Rick's group from a a twenty man strong Savior battalion, alone.

Paul Rovia was a lone survivor with long hair, and a well-kept mustache and beard, which earned him the nickname "Jesus" from his friends. He was skilled in martial arts, which was always an asset of great value when dealing with the undead or unruly survivors. As with many, Paul would do just about anything to survive, even stealing from others. Paul encountered Rick Grimes and Daryl Dixon at a gas station several miles outside of Alexandria, Virginia. Rick and Daryl pulled their guns on him and were instantly on alert. Jesus went on the defensive and apologized for upsetting them. He was in quite a hurry and excused himself, but not before pick-pocketing the keys to the moving truck that Rick was driving. To keep Rick and Daryl distracted, Jesus set off some firecrackers behind the building, which sounded like gunshots. By the time Rick and Daryl figured out what was going on, Jesus was driving down the highway in a stolen truck.

Rick and Daryl pursued Jesus on foot and caught up with him after the truck blew a tire. They fought with him, and though Jesus did very well for himself, he was clearly outnumbered. Rick and Daryl defeated him, tied him and left him on the side of the road. Rick told him that he kept the knots loose and that he should be able to wriggle free on his own in short order. Jesus did exactly that, and climbed onto the roof of the vehicle as the two were driving away. When Rick heard a sound on the roof, he slammed on the brakes, which sent Jesus sprawling out onto the road. The three of them fought again, but the noise attracted the attention of some walkers. While Rick dealt with a few of them, Daryl continued punching on Jesus inside the cab of the truck. Jesus got his gun away from him and pointed it at Daryl. He then told him to "duck", and as Daryl did so, Jesus shot the walker that was closing in behind him. Though Daryl was grateful for the save, it didn't make him any less angry at Jesus and they continued fighting.

The truck lurched off an incline in the road and began slipping into a lake. Daryl and Jesus tumbled out of the truck, but the open door slammed Jesus in the head knocking him out. Rick didn't believe that the man was inherently evil, and decided to bring him back to Alexandria.

Paula was a member of the Saviors who held Carol Peletier and Maggie Greene hostage after finding them outside of the Saviors' base that Rick and his group were attacking. Paula agrees to a trade between Primo, the only surviving Savior from the base and Carol and Maggie. While captive, Carol plays herself off as a feeble woman devout in her faith to get the Saviors to underestimate her (although it could also be Morgan's "all lives are precious" mentality had an effect on her). Maggie and Carol manage to kill Molly and Michelle with Paula and Carol fighting. Paula ends up being impaled on a metal pole where she is eaten by walkers and later turns but is put down by Maggie. (WD: The Same Boat)

Pete Anderson was the abusive husband of Jessie Anderson and the father of Ron and Sam Anderson. He is an Alexandria resident who develops a rivalry with Rick Grimes due to Rick's attraction to Jessie. After Rick learns of the abuse, he confronts Pete, which erupts into a brawl as they crash through the window of Jessie's home and continue their fight out on the streets where Rick gets the upper hand. Pete is then later threatened by Carol Peletier, who also had a bad experience with being abused by her husband. A drunk and angered Pete later shows up at the town meeting wielding Michonne's katana and attempts to kill Rick but accidentally slices Reg Monroe's throat when he attempts to break up the situation. A grieving Deanna Monroe gives Rick the go-ahead to execute Pete, which he does by shooting him in the head just as Morgan Jones, Aaron and Daryl Dixon return to Alexandria.

Pete Dolgen was the younger brother of Mitch Dolgen and a member of Caesar Martinez' group. He was murdered by the Governor and left to die drowning in a lake. The Governor later passed by the lake to see the now zombified Pete clawing through the water.

Primo was a member of the Saviors and the only surviving member from the base. He is caught by Rick's group who shoots him down after hearing him attempting to flee on Daryl's motorcycle that was stolen by Dwight earlier. Polly, who has captured Carol and Maggie, agrees to a trade between Primo and the two but Carol and Maggie manage to fend off their captors, nullifying the trade. When Primo is questioned by Rick about Negan, Primo proclaims that he is Negan and is promptly shot in the head by Rick.

Retrieved from "https://headhuntershorrorhouse.fandom.com/wiki/Walking_Dead/P?oldid=187396"
Community content is available under CC-BY-SA unless otherwise noted.