Laura was a Caucasian female and a member of the Saviors. She had a tattoo on the side of her neck. She was part of Negan's entourage who made trips to the Alexandria Safe-Zone. Spencer Monroe tried flirting with her in a vain attempt to gain favor with the Saviors. He died soon after as a result of his presumptuousness. When Negan took Eugene Porter as a captive, Laura became his handler, and ushered him to his new quarters at the Sanctuary. She provided him with food including a large jar of pickles.

Len was a white male with dark hair, who was living in the U.S. state of Georgia in the years following the fall of society. He became part of a group called the Claimers, which were led by a man named Joe. The Claimers were nomadic, and took food and shelter wherever they could find it. Joe had few rules concerning the group, but there were two rules that he adhered to with strict decree. The first was that if somebody wanted something, all they had to do was claim to it. The second was that nobody could ever lie to him. The Claimers found Daryl Dixon roaming about on his own, and Joe invited him to become part of the group. Len took an immediate disliking to Daryl, and the feeling was reciprocated. When Daryl tried hunting for a rabbit, Len fired first, laying claim to the rabbit, even though Daryl had been tracking it all morning. Joe arbitrated the dispute democratically, and cut the rabbit in half, giving a piece to each of them. Later, the Claimers bunked down at a loading dock facility. Len planted his half of the rabbit with Daryl's bedding, later claiming that Daryl stole it from him. Daryl told Joe that Len had planted it, and Joe decided to believe him. He instructed his men to punish Len for lying and cheating. The other Claimers pounced upon him, brutally kicking him repeatedly. Ultimately, they killed him and left his body outside. Daryl came upon Len's corpse later with an arrow sticking out of his eye socket.

Lilly Caul was a Caucasian woman and a survivor of the zombie apocalypse. She was a resident of Woodbury under the leadership of Brian Blake, aka The Governor.

Lilly Caul participated in The Governor's final raid on the survivors at The Prison. She shot and killed Lori Grimes, who was carrying her infant daughter Judy at the time. Lori's corpse fell upon the baby, suffocating it, making Lilly indirectly responsible for Judy's death as well.

Lilly was extremely distraught over this and blamed the Governor for forcing her to kill a baby. She pulled out a pistol and shot the Governor in the back of the head, and left his corpse to be consumed by zombies. (Walking Dead 48) What became of Lilly Caul following these events is unknown.

Lou was an adult male and a resident of the Woodbury community in Georgia in the years following the zombie outbreak. Lou and another man named Denny were tasked with guarding the office of Doctor Stevens. Two men named Caesar Martinez and Glenn knocked Lou out. What became of him following the Woodbury vs. The Prison war is unknown. (Walking Dead 32)

Louie was a Caucasian male in his apparent late thirties during the years when the zombie apocalypse first caused the fall of society. He was living in the U.S. state of Virginia and became a member of a community known as the Hilltop Colony. Louie befriended a man named Larry, but fell into a depression after Larry had been killed by the Whisperers, which caused him to turn to heavy drinking. He became part of the militia under Rick Grimes to combat the Whisperers.

Louis Morales was the son of Morales and Miranda Morales. He had a sister named Eliza. Louis accompanied his parents when they took up shelter with other survivors at the Rock quarry campsite. Following a walker attack that resulted in the deaths of several members of their group, the Moralas family decided to leave the camp to reconnect with family in Birmingham, Alabama.

Lucille is the nickname attributed to a baseball bat wielded by Negan. Negan wrapped Lucille in barb wire, which made it an effective weapon against Walkers and humans alike. Negan used Lucille to beat Glenn Rhee to death. (The Walking Dead comic series; Issue #100)

In the spin-off prequel series Here's Negan as well as the fifth episode of the eight season "The Big Scary U", it is revealed that Lucille is named for Negan's late wife who died of illness before the apocalypse. 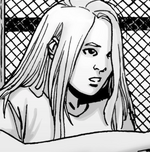 Lydia was a teenage Caucasian female with long blonde hair. She was a survivor of the zombie apocalypse, and was living in the U.S. state of Virginia following the collapse of society. Lydia was the daughter of Alpha, who was the leader of a group called the Whisperers. The group's trademark was to disguise themselves by wearing the preserved skins of the dead. Lydia was part of a Whisperer herd that encountered Paul Monroe of Hilltop Colony and Darius of Alexandria on the road. This was her first outing with such a group. The Whisperers attacked the group, and she nearly got the drop on Monroe and lunged behind him with a knife. Monroe defended himself by elbowing her, which caused Lydia to stab herself in the shoulder. Lydia begged Paul not to kill her, and he brought her back to Hilltop as his prisoner. As a prisoner at Hilltop, Lydia told Maggie Greene and the others about the Whisperers, and their methods and practices. During this time, she befriended Carl Grimes, who had been temporarily imprisoned as punishment for beating up on some bullies. The two grew close and Lydia admitted that Carl made her feel safe. She then propositioned him for sex, to which Carl agreed. She then revealed that her own people would occasionally force themselves upon her.

Retrieved from "https://headhuntershorrorhouse.fandom.com/wiki/Walking_Dead/L?oldid=246709"
Community content is available under CC-BY-SA unless otherwise noted.