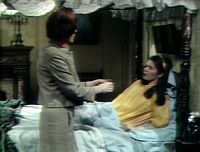 Victoria Winters' bedroom is a fictional location featured in the original daytime Gothic soap opera Dark Shadows. It is one of the forty rooms found in the Great House at Collinwood, located in Collinsport, Maine.

This was where Victoria Winters slept. In the 1920s and 30s, it was Elizabeth Collins' bedroom. She relocated to another room following her marriage to Paul Stoddard. [1]

Upon first arriving at Collinwood, David demonstrated his dislike for Vicki by sneaking into her room and re-packing all of her bags for her.

When Vicki returned from a bizarre sojourn into the year 1795, she was physically and emotionally exhausted. She was taken to her room where Julia Hoffman used her medallion in order to hypnotize Vicki in the hopes of recalling events from the past. When this failed, Julia gave Vicki a sedative. That evening, Vicki had a dream in which she saw the mangled form of Jeremiah Collins rising from his grave. [2]

This was also the room where Barnabas Collins proposed to her, but Vicki turned him down. That same night, the spirit of Jeff Clark appeared before Vicki and pulled her into the timestream back to the 18th century. [3]

Retrieved from "https://headhuntershorrorhouse.fandom.com/wiki/Victoria_Winters%27_bedroom?oldid=140803"
Community content is available under CC-BY-SA unless otherwise noted.