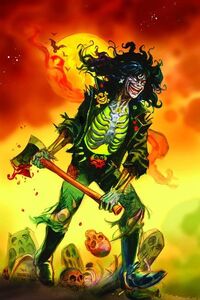 Undead is a condition wherein a person's body ceases to go on living, but the person is too stupid to know the difference. In most cases, the undead refers to vampires, but may also refer to zombies, mummies or reanimates. In the case of vampires, a human being has their blood drained by a vampire, at which point they either die on their own, or die after then consuming the blood of a vampire. In either case, the person then rises from the grave as one of the undead. They have a mind and their bodies continue to function, but this is perpetuated through supernatural means as their normal life functions have ceased to exist. They do not have brain waves, beating hearts or a serviceable respiratory system. They also don't poop.

Serial killer Jason Voorhees once started out as a normal human being, though the nature of how he survived a drowning incident when he was only 11-years-old raises some doubt as to this. Despite this, Jason appeared to be completely human up until the time that he was hacked to death by a young boy named Tommy Jarvis. Many years later, when Tommy was an adult, he was still tormented by thoughts of Jason and tried to destroy his body. He impaled a metal fence post into the corpse's chest, which was then struck by lightning. Inexplicably, this caused Jason to rise again as some undead killing machine. Jason went on to be destroyed and reborn numerous times after that. Even dream demon Freddy Krueger managed to resurrect Jason from the bowels of Hell to make him his personal undead agent on Earth.

Slashers are a breed of undead featured in the Hack/Slash comic book franchise. They are not zombies in the Romero-esque sense, as they are not necessarily flesh-eaters, though they certainly can be if one feels so inclined. They also differentiate from classic zombies in that they maintain at least some measure of intellect, though it is often governed by anger, pain, and a thirst to avenge themselves against the world. The means by how one becomes a slasher is unclear, though the act of dying does seem to be a prerequisite - at least for some. The term "slasher" was attributed to these monsters by Cassie Hack. Classically however, "slasher" has always been used to describe some masked maniac with a bladed weapon, hacking up unsuspecting teens at a campground or in some suburban neighborhood in Anytown, USA. Cassie Hack, who always felt like something of a monster on the inside herself, has dedicated her life towards hunting down and destroying Slashers wherever they appear. She is accompanied by her gentle giant partner, Vlad, who is a deformed man who gives the appearance of being a slasher, but is in fact human. The first Slasher that Cassie ever encountered was actually her own mother - dubbed "The Lunch Lady" due to her profession as a cook at Cassie's high school.

Retrieved from "https://headhuntershorrorhouse.fandom.com/wiki/Undead?oldid=256435"
Community content is available under CC-BY-SA unless otherwise noted.