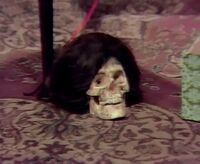 Skulls are the bone matter that comprises the head of a living, or in many cases, once-living organism. The top of the skull is called the cranium. The lower jaw and cheek bone region is referred to as the mandible. The purpose of a skull is to provide a housing for the brain as well as support for the face which includes eyes, ears, mouth, nose and chin.

Retrieved from "https://headhuntershorrorhouse.fandom.com/wiki/Skull?oldid=152873"
Community content is available under CC-BY-SA unless otherwise noted.