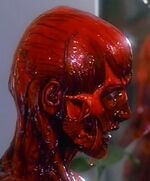 Skinless Julia refers to the character of Julia Cotton from the Hellraiser film series. This version of Julia appeared in the 1988 movie Hellbound: Hellraiser II. Whereas actress Clare Higgins played Julia in her regular apperances in both that film and it's predecessor, Hellraiser, the skinless version of Julia was played by actress Deborah Joel.

Retrieved from "https://headhuntershorrorhouse.fandom.com/wiki/Skinless_Julia?oldid=147837"
Community content is available under CC-BY-SA unless otherwise noted.