Skeeter is a fictional vampire and a central character in the Vamps family of comic book titles published by DC Comics under their Vertigo imprint. She first appeared in Vamps #1 in August, 1994.

Skeeter was the nickname given to a fiery, red-haired female vampire. Born in 1954, She was one of five such young women transformed into a creature of the night by a vampire biker named David. David maintained a practice wherein none of his brood were allowed to eat until his own bloodlust had been sated first. As such, his "vamps" shared the degrading duty of finding fresh victims for him. They were forced to satisfy their own needs from their master's cast off leftovers.

In 1994, Skeeter and her blood-sisters decided to fight back. After watching their master reeling blood-drunk after a feeding in North Carolina, the five vamps pounced upon him. They tied his limbs to the back of their motorcycles, then drove in opposite directions away, quartering him. The group then used the discarded motorcycles of their human victims and traveled west towards Texas.

Upon arriving in the Lone Star State, they forged false identities for themselves and began hunting at local biker bars. After consuming the blood of a Native American man in the middle of the desert, Skeeter and the others rode off for Las Vegas. At a casino on the Vegas strip, Skeeter seduced a blackjack dealer and took him to one of the hotel rooms where she fed on him. 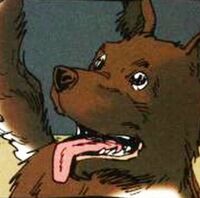 Skeeter is the name of a fictional animal featured in comic books published by DC Comics. He appeared in issues of the Vertigo title Preacher. Skeeter was a dog that befriended Jesse Custer.

Skeeter is also the name of another DC Comics character, Ellie Mae Skaggs. Ellie Mae lived in Fayerville, South Carolina in the late 1800s. In 1865, she was turned into a vampire. In the modern era, she ran afoul of two well-known costumed heroes, Batman, and Superman.

Retrieved from "https://headhuntershorrorhouse.fandom.com/wiki/Skeeter?oldid=223044"
Community content is available under CC-BY-SA unless otherwise noted.