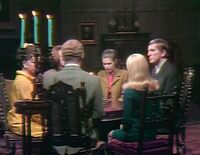 A séance is the process by which an assemblage of people attempt to communicate with a spiritual entity. A séance is typically presided over by a medium, who is usually gifted with some measure of spiritual affinity. The medium acts as both a conduit and an arbitrator, allowing discourse between the spiritual entities and individuals who wish to communicate with them. At one point, the practice was considered to be one of serious undertaking. Séances became quite popular amongst the upper-class in Victorian-era England. By modern standards, séances have come to be regarded as a form of entertainment. Most people who consider themselves rational thinkers are skeptical as to the legitimacy of such practices. Séances were a commonly used plot device on television programs such as the original Dark Shadows.

Retrieved from "https://headhuntershorrorhouse.fandom.com/wiki/Séance?oldid=259236"
Community content is available under CC-BY-SA unless otherwise noted.