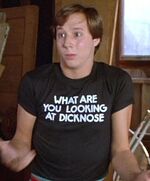 Profanity is when people use bad poo-poo words in film. The use of profanity is often presented to demonstrate the emotional or moral state of a character. It is often use to insult or debase another individual or to express a certain level of intensity with regards to a character's situation.

Vulgar language can range from REALLY bad words like sh-t, f--ck or c-nt to more benign ones like bitch, ass, damn and in some cases even hell. Some people may regard the phrase "God damn it" as profane since it is an offense to the Judeo-Christian God. There are also profane words used to describe sexual acts as well as genitalia. Racial slurs may also be considered a form of profanity.

American comedian George Carlin categorized certain profane phrases in a comedy sketch which has come to be known as the "Seven dirty words". These are seven words that you can never say on network television. They include, shit, piss, fuck, cunt, cocksucker, motherfucker, and tits. Of course, you can find these words aplenty on shows broadcast on HBO.

Retrieved from "https://headhuntershorrorhouse.fandom.com/wiki/Profanity?oldid=199118"
Community content is available under CC-BY-SA unless otherwise noted.