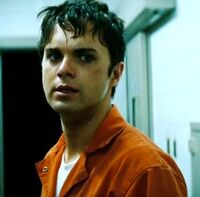 A prisoner is anyone who has been locked up behind bars for one reason or another. People who break the law are chucked into a jail cell so they can await trial. If the crime is serious enough, they may end up going to a Federal pound-me-in-the-ass prison, in which case, they are now convicts. After serving their allotted time, a prisoner may be let go. There is also a nice little get-out-jail (not so) free card called parole, which means you are no longer a prisoner, but you got the eyes of law watching you at every turn.

Sometimes people are jailed for crimes they didn't even commit. Tommy Jarvis was thrown into a jail near Camp Forrest Green because Sheriff Garris feared that he was drumming up too much Jason Voorhees hysteria (plus, he wanted to keep Tommy's fingers away from his hot daughter, Megan. [1]

Freddy Krueger is responsible for framing a few different individuals for crimes they didn't commit. Rod Lane was tossed in the pokey for allegedly slaughtering his girlfriend, Tina Gray and Jesse Braun was likewise incarcerated after he was found running around with blood on his hands following the death of his girlfriend, Kris Fowles. [2][3]

Cotton Weary from the Scream film series was an innocent man who went to jail for allegedly raping and murdering Maureen Prescott. It was the testimony of Maureen's daughter, Sidney, that led to his capture. Ultimately however, Cotton was exonerated. [4]
Scream 2</ref>

Then there's the other kind of prisoner. The kind that have nothing to do with crimes & misdemeanors. They are the poor bastards who are abducted by some sick whacko and held against their will. They usually turn up chained in some dank basement somewhere where they are physically and/or psychologically tortured.

Retrieved from "https://headhuntershorrorhouse.fandom.com/wiki/Prisoner?oldid=217944"
Community content is available under CC-BY-SA unless otherwise noted.