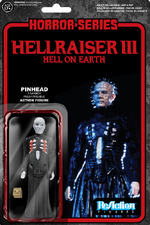 Pinhead is that loveable ole demonic bald pincushion from Clive Barker's immortal Hellraiser film series. The character has been made into an action figure for the Hellraiser toy line, and has also been branded with the mint-on-card qualifier for the ReAction horror series line. The ReAction figure is based on the image of the character as seen in the film Hellraiser III: Hell on Earth and 3¾ tall and fully poseable. He also comes with a Lemarchand puzzle box accessory.

Retrieved from "https://headhuntershorrorhouse.fandom.com/wiki/Pinhead_action_figure?oldid=160953"
Community content is available under CC-BY-SA unless otherwise noted.