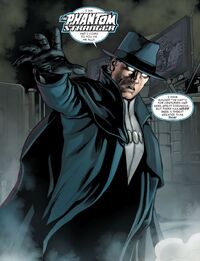 The Phantom Stranger is a fictional super-powered being featured in comic books published by DC Comics. He is considered part of both DC's supernatural contingent of characters, but because of his vast, and often undefined power set, also fits in with DC's cosmic themed books. The Stranger does not fit into any one particular archetype. He is an immortal being of cosmic level power, but may also be an Angel of Heaven, or in some cases, a simple ghost. He is classically depicted wearing a black suit with a white turtle-neck, a gold medallion hanging over his chest, a wide-brimmed hat and a high-collared cape. The brim of his hat casts a large shadow over his eyes, often giving the illusion that the Phantom Stranger wears a mask.

Retrieved from "https://headhuntershorrorhouse.fandom.com/wiki/Phantom_Stranger?oldid=163901"
Community content is available under CC-BY-SA unless otherwise noted.