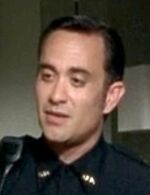 In the years prior to the zombie apocalypse, O'Donnell, first name unknown, was a police officer for the Atlanta police department. After the fall of society, he became one of several such surviving officers to occupy a facility at Grady Memorial Hospital in the Slabtown district of the city. The officers holed up at the hospital operated under the leadership of Dawn Lerner. O'Donnell was mean and aggressive, and known for abusing a patient named Percy. He challenged Dawn's authority, which led to a physical altercation between the two. One of the hospital's other trustees, Beth Greene, saved Dawn's life by pushing O'Donnell down and elevator shaft, killing him. Presumably, he reanimated some time later.

Retrieved from "https://headhuntershorrorhouse.fandom.com/wiki/O%27Donnell?oldid=185847"
Community content is available under CC-BY-SA unless otherwise noted.