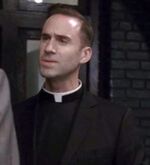 A monsignor (pronounced "mon-seen-yoor") is a title given to members of the clergy. Specifically, it relates to the Catholic Church and is considered an honorific title. As such, a monsignor does not hold any particular authority within the Church diocese, unless he also holds a separate title such as Bishop or Archbishop. Basically, people call themselves Monsignor when they want to feel important.

In the 1923 silent film classic, The Hunchback of Notre Dame, there are two characters who hold the title of Monsignor. One is Monsignor Neufchatel, played by Harry Van Meter (which is also the name of a type of cheese), and the other is Monsignor Le Torteru, played by Nick de Ruiz.

Actor Rupert Davies played a Monsignor in the 1968 movie Dracula Has Risen from the Grave by Hammer Film Productions. His character was named Monsignor Ernest Mueller.

David Gale played an unnamed Monsignor in the 1990 paranormal thriller, The First Power.

On the FX Network television series American Horror Story, actor Joseph Fiennes played a character named Timothy Howard, who held the title of Monsignor during his years of service to the church in the 1960s. He was also addressed by the full title, The Reverend Monsignor, up until his ascension to Cardinal of New York.

Retrieved from "https://headhuntershorrorhouse.fandom.com/wiki/Monsignor?oldid=133778"
Community content is available under CC-BY-SA unless otherwise noted.