Maria, last name unknown, was born in 1949. In 1968, she was attending school as a nursing student and was rooming at the L.A. "Murder House", along with several friends. A man known as R. Franklin, came to the house on a rainy night, claiming that he had been injured in an accident. Maria let him into the house and offered to dress his wounds. R. Franklin, who was actually a serial killer, killed Maria's friend Gladys, then forced Maria to don a nurse's uniform. He then walked behind the couch and stabbed her repeatedly until she was dead.

Maria is a fictional chambermaid featured in the 2005 psycho-thriller, The Devil's Rejects. She was played by actress Jossara Jinaro.

Maria was the housekeeping attendant who discovered the remains of Jimmy and Gloria Sullivan. She also had a harrowing encounter with the terrified Wendy Banjo minutes before she died.

Maria was a young Mexican woman and the wife of the black magic brujo Don Bartolo. She was also pregnant with Bartolo's child, and often suffered great abuse at his hands. When Don Bartolo's grandson, Jesus Velasquez was murdered by a possessed Lafayette Reynolds, Don Bartolo recovered his remains and brought them back to Mexico. He captured Lafayette with the intent of killing him, but Maria fought back, stabbing her husband multiple times until she died. She then freed Lafayette. What became of Maria and her unborn child following this event is unknown. 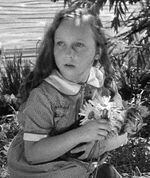 Maria , also referred to as "Little Maria", is a fictional child victim featured in the classic Universal Monsters film series. Played by actress Marilyn Harris, she appeared in the 1931 film Frankenstein. The character of Maria was created by director James Whale and screenwriters Garrett Fort and Francis Edward Faragoh based upon a composition drafted by John L. Balderston, which in turn, was inspired by concepts developed by author Mary Shelley. Maria's family name is not provided in either Frankenstein or in The Bride of Frankenstein. She is referenced in the latter, and her parents make an appearance in the beginning of the film, but she does not make an appearance herself.

Retrieved from "https://headhuntershorrorhouse.fandom.com/wiki/Maria?oldid=170236"
Community content is available under CC-BY-SA unless otherwise noted.