Leatherface is the mentally-challenged killer from The Texas Chainsaw Massacre Series, its sequels, the remake and the prequel. He kills his victims with either a mallet or, most famously, with a chainsaw. After he kills his victims, he cuts their face completely off and wears it for a mask (thus earning his nickname.) As with a few other slasher villains, he is based off Ed Gein, who also wore a mask out of human skin. 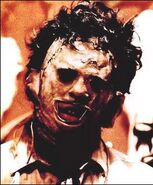 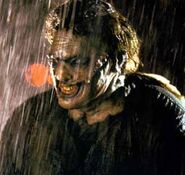 Leatherface (2017)
Add a photo to this gallery

Retrieved from "https://headhuntershorrorhouse.fandom.com/wiki/Leatherface?oldid=231563"
Community content is available under CC-BY-SA unless otherwise noted.