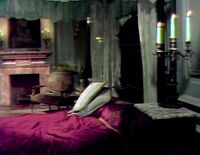 Josette du Pres' bedroom is a fictional room featured in the 1960s daytime Gothic soap opera series Dark Shadows. It was a recurring set featured on the program, and was located at the Old House on the Great Estate of Collinwood in Collinsport, Maine. In the latter half of the 18th century, the woman known as Josette du Pres occupied this room.

In 1795, this was Josette DuPres' bedroom where she stayed briefly prior to her wedding to Jeremiah Collins. In 1967, Barnabas Collins refurbished the room, restoring it to its original condition, including all of Josette's perfectly preserved belongings including her wedding gown, hair brush and other toiletries. The portrait of Josette, which was formerly hung above the mantle in the downstairs parlor, was moved into the refurbished room.

Barnabas abducted a local woman named Maggie Evans, whom he believed to be the reincarnation of his lost Josette and held her captive in the bedroom. Through his hypnotic powers, he even convinced Maggie that she was Josette for some time. Maggie eventually escaped, but with the help of Doctor Julia Hoffman, possessed no memories of her time as Barnabas' prisoner.

Joe Haskell was later brought her after having suffered an injury, as well as a rapid deterioration of mental stability. He took a tie-cord from one of the curtains in the room, which he used to strangle Barnabas Collins. (DS 614)

Retrieved from "https://headhuntershorrorhouse.fandom.com/wiki/Josette_du_Pres%27_bedroom?oldid=152732"
Community content is available under CC-BY-SA unless otherwise noted.