Jerry was the bespectacled driver of the van that brought his four friends and he through Muerto County, Texas. Jerry was Leatherface's third victim and was beaten to death with a hammer while trying to find out what happened to Kirk and Pam. 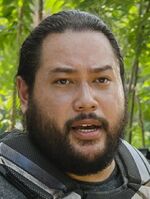 Jerry was a barrel-chested man in his apparent thirties and a survivor of the zombie apocalypse. He became a member of a community called The Kingdom and served as chief adviser under King Ezekiel. Jerry usually stood next to Ezekiel's throne in the auditorium and announced the various guests seeking an audience with the king. He occasionally engaged in the same theatrical verbiage that Ezekiel employed, but was known to break character and snicker from time to time.

During the time jump in Season 9, he is now in a relationship with Nabila, a fellow resident of the Kingdom and has three children named Ezra, Aliyah and Mariam with her.

Retrieved from "https://headhuntershorrorhouse.fandom.com/wiki/Jerry?oldid=251259"
Community content is available under CC-BY-SA unless otherwise noted.