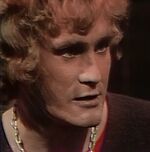 A hippie is a member of a counterculture and youth movement active during the mid 1960s and early 1970s. The early hippies inherited the countercultural values of the Beat Generation, created their own communities, listened to psychedelic rock, embraced the sexual revolution, and some used drugs such as cannabis, LSD and magic mushrooms to explore altered states of consciousness. In the United States, the hippie movement is connected to two major historical events; the volatile protests held to renounce US activity in Vietnam and the Woodstock music and art festival held in Bethel, New York from August 15th to the 18th, 1969.

Retrieved from "https://headhuntershorrorhouse.fandom.com/wiki/Hippie?oldid=242948"
Community content is available under CC-BY-SA unless otherwise noted.