Helen McCrory is a film, television and stage actress. She was born in London, England on August 17th, 1968. Her first film work was playing a whore in the 1994 film adaptation of Anne Rice's Interview with the Vampire, directed by Neil Jordan. She was 26-years-old at the time. She later went on to play the lead role of Victoria Frankenstein in the 2007 British television movie, Frankenstein: The Director's Cut. Beginning in 2014, Helen made recurring appearances on the Showtime series Penny Dreadful playing a medium named Madam Kali, aka Evelyn Poole. She made two appearances in season one of the show, but became a series regular on season two. She made twelve credited appearances in the series in total, but only eleven actual appearances. 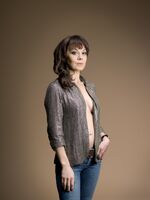 Retrieved from "https://headhuntershorrorhouse.fandom.com/wiki/Helen_McCrory?oldid=232065"
Community content is available under CC-BY-SA unless otherwise noted.