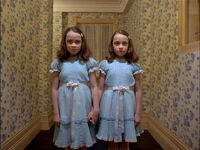 The Grady daughters are the siblings of former caretaker Delbert A. Grady. Though they dress similarly and look like one another, they are not twins, though they are often mistaken for twins. The Grady daughters are ages eight and ten. In the winter of 1970-1971, Delbert Grady went insane and butchered his daughters with an axe. Their ghosts remained behind at the Overlook Hotel. Danny Torrance saw them on the second floor of the hotel where they beckoned him to come play with them. Danny also saw a visual of the girls' bodies hacked to pieces and splayed upon the floor in front of an elevator.

Retrieved from "https://headhuntershorrorhouse.fandom.com/wiki/Grady_daughters?oldid=245422"
Community content is available under CC-BY-SA unless otherwise noted.