Ghostface is the name attributed to any of several different psychotic serial murderers featured in the Scream film franchise and television series. The character is classically characterized by wearing an eerie ghost mask with a black hood, a long black cape with tapered ends, as well as gloves and boots. Ghostface's preferred means of killing is stabbing people to death with a large knife. The individual wearing the Ghostface costume generally has their heart set on making life miserable for Sidney Prescott, but some of them are simply bad apples to start with, and have their own convoluted motivations behind committing acts of murder. Another trademark of Ghostface is that he or she would usually communicate via telephone calls in which they speak through a voice changer, thereby disguising their identity. In Scream: The Series, the killer also made use of smart phone texting.

The following is a list of serial killers who have donned the mask and garb of Ghostface. As there have been several such individuals each one is listed separately. In order to maintain an heir of mystery as to who which one is, their actual names are hidden.

WARNING: Clicking on a link below will take you to the character's page, thus spoiling the movie for you if you have not already seen it. Also, hovering your computer's cursor above a link will highlight the individual's name. Use common sense. If you don't want to be spoiled, don't click on, or hover over the link. 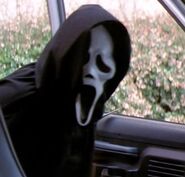 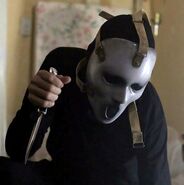 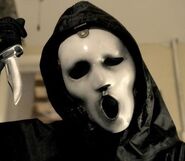 Ghostface X
Scream: The Series
Add a photo to this gallery 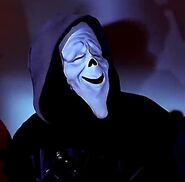 And then there's THIS guy.
Scary Movie
Add a photo to this gallery

As above, the actual actor's name is piped to a generic title so as to not spoil any important information from the film. Click on the link or hover your cursor above the name in order to reveal which actor portrayed that version of Ghostface.

Retrieved from "https://headhuntershorrorhouse.fandom.com/wiki/Ghostface?oldid=239298"
Community content is available under CC-BY-SA unless otherwise noted.