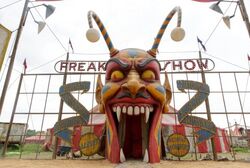 Fräulein Elsa's Cabinet of Curiosities is the name of a fictional carnival "Freak Show" featured on the FX Network television series American Horror Story. It was the primary setting of season four of the program, which was also subtitled as "Freak Show". It was first seen in the season premiere, "Monsters Among Us", and had subsequently appeared in the remaining twelve episodes of the season.

Fräulein Elsa's Cabinet of Curiosities was founded in the early twentieth century by German expatriate Elsa Mars, who harbored great compassion upon the so-called "freaks" in her employ. Perhaps this was due to her own disability in that she had no legs, though she kept this characteristic a secret from the others. By the early 1950s, the popularity of carnival sideshows was waning, and Elsa's troupe was one of the last great Freak Shows in North America.

Retrieved from "https://headhuntershorrorhouse.fandom.com/wiki/Fräulein_Elsa%27s_Cabinet_of_Curiosities?oldid=217953"
Community content is available under CC-BY-SA unless otherwise noted.