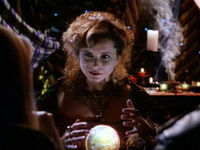 A fortune teller is someone who professes to use psychic talents in order to divine an individual's future. Some also claim to have the ability to commune with the deceased, transferring messages from passed loved ones in the afterlife to their surviving family members.

In most cases fortune tellers are charlatans who use keen powers of observation and psychological manipulation to con people out of money by supposedly providing them spiritual comfort. In horror fiction, fortune tellers often hail from Gypsy stock or, at the very least, wear the trappings of what one would come to expect from a Gypsy.

Retrieved from "https://headhuntershorrorhouse.fandom.com/wiki/Fortune_teller?oldid=258094"
Community content is available under CC-BY-SA unless otherwise noted.