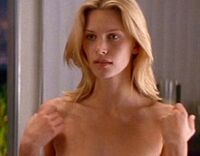 Female topless nudity is a visual characteristic found in many horror films and some television programs. It relates to full exposure of one or both breasts of an adult woman; often referred to as "boobs" or any other number of derogatory slang terms. Films that feature female topless nudity generally receive an R rating while television programs that feature nudity receive a TV-MA rating. Female topless nudity is almost always gratuitous, and never truly services the story. It is more common in the horror genre than any other film type mostly because of the genre's target demographic, which are males between the ages of 17 to 30. The subgenre of horror that seems to feature the most topless nudity is the slasher genre. Though considered mature content, it's usage is anything but and is designed primarily to titillate.

The Friday the 13th film series is notorious for it's use of female topless nudity and when New Line Cinema took over the franchise, their executives established that at least one nudity shot was required per an allotted passage of screen time in each film.

Retrieved from "https://headhuntershorrorhouse.fandom.com/wiki/Female_topless_nudity?oldid=209864"
Community content is available under CC-BY-SA unless otherwise noted.