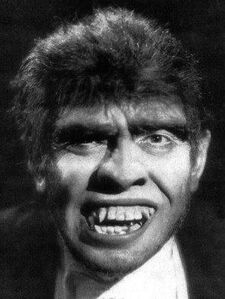 Edward Hyde is a real A-Hole. Ask anyone. It's practically a universal truism. Also known as Mister Hyde, Edward Hyde is a figure of Victorian-era Gothic literature and is the evil counterpart to the character of Henry Jekyll. He is the central antagonist from the 1886 novel The Strange Case of Dr. Jekyll and Mr. Hyde by author Robert Louis Stevenson. The basic premise behind the character is that he represents the psychological Id to Henry Jekyll's ego, and is a transmogrified version of the same character. In an effort to separate the man's morality center from that of his more base, primal emotions, Doctor Jekyll devised a serum, which he then consumed. The serum transformed him from his normal mild-mannered state into the loathsome and violent Mister Hyde. After a few hours, Jekyll's consciousness would eventually gain dominance once again until such time that Jekyll drank some more of the formula. Traditionally, the change begins to take affect on its own, and the good doctor loses the ability to control Mister Hyde.

The personality of Edward Hyde changes from film to film, but they all maintain certain common traits. In addition to adverse physical abnormalities, Mister Hyde is always presented as a violent and selfish being. A true psychopath, he has no capacity for human compassion, and exists only to serve his own hedonistic desires. This includes carousing and indiscriminately fornicating with women who strike his fancy. Whether these women find him desirable or not makes no never mind to Hyde, and he is not above forcing his affections upon them. Crude and brutal, Mister Hyde has no compunction against killing and will gleefully commit murder against anyone who crosses him. His favorite methods for doing so is either through caning, or strangulation, though he is not above trampling someone down with a horse carriage either.

The story of Dr. Jekyll and Mr. Hyde has been adapted into film numerous times over. With few exceptions (which will be noted later), the actor playing Doctor Jekyll also plays the role of Mister Hyde. There were several minor independent film works produced throughout the early 1900s, but the first major film adaptation was in 1920 when John S. Robertson directed a silent film based on the story titled just Dr. Jekyll and Mr. Hyde. In this film, the role of both Henry Jekyll and Edward Hyde were played by actor John Barrymore. Barrymore's version of Jekyll bore an eerie countenance, but was otherwise relatively human looking. With each new iteration of the character, the Hyde figure becomes more and more bestial.

The second film adaptation of the novel, also released in 1920, was directed by J. Charles Hayden, and featured Sheldon Lewis pulling in double-time as Doc Jekyll and his more unsavory antithesis, Edward Hyde.

Of the classic film era, only one other rendition of this tale resonates with the public consciousness, and that was the 1941 movie, Dr. Jekyll and Mr. Hyde, directed by silver screen giant Victor Fleming. In this movie, the role of Doctor Henry Jekyll, as well as that of Edward Hyde, was portrayed by actor Spencer Tracy.

Naturally, you cannot have a Gothic Victorian-era style of horror tale going around without Hammer Film Productions getting into the mix. They spun their own version of the tale in 1960 with a movie directed by Terence Fisher called The Two Faces of Dr. Jekyll, making it one of the first films to deviate from the traditional Dr. Jekyll and Mr. Hyde naming convention. This time around, the good doctor and his not-so-better half were played by British actor Paul Massie.

Hammer wasn't quite done with the Jekyll & Hyde concept though. They revisited it in 1971 with a movie titled, Dr. Jekyll and Sister Hyde. For the first time ever, the Jekyll & Hyde motif underwent a bit of gender flipping, and as such, is one of the first examples of Henry Jekyll and Edward Hyde (or in this case, Edwina Hyde), being played by two different actors. Hammer staple Ralph Bates assumed the role of Henry Jekyll with Martine Beswick taking on the form of his more voluptuous counterpart, Sister Hyde.

An often forgotten, yet respectable take on this classic story unfolded in the form of the 1996 drama Mary Reilly starring Julia Roberts. The story is revealed through the point of view of Henry Jekyll's housemaid, Mary Reilly, with John Malkovich methodically shifting through his scenes as a somewhat soft-spoken, yet still creepy in a truly Malkovichian way, Henry Jekyll.

The 2000s have not been particularly kind to fans of Robbie Lou Stevie's favorite schizo. First, the world was treated to a valium-induced and unforgivable CGI-rendered Mister Hyde in League of Extraordinary Gentleman. Remember that piece of crap? Jason Flemyng played the part of Henry Jekyll and moderately doubled as Mister Hyde courtesy of some early pre-motion capture magic. Another version of Jekyll and Hyde, who bore an odd similarity to the LXG version, appeared in the beginning of 2004's monster mash movie, Van Helsing. The film merges elements of The Strange Case of Dr. Jekyll and Mr. Hyde with Murders in the Rue Morgue, with an over-sized Hulk-like Mister Hyde causing mayhem in Paris, France. Rendered primarily through CGI, Edward Hyde was voiced by actor Robbie Coltrane. Doctor Jekyll only made a brief cameo in the movie and was played by Stephen H. Fisher, making this one of the few films where the Jekyll and Hyde characters were played by two different actors.

Only a few short years later, a more modern take on the Jekyll & Hyde story was brought to life in the form of a television movie, Dr. Jekyll and Mr. Hyde, which was directed by Paolo Barzman and aired on May 17th, 2008. This time around, it was Dougray Scott's turn to take on the challenging role of Mister Edward Hyde. 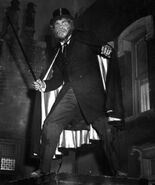 Edwina Hyde
Dr. Jekyll and Sister Hyde
(1971)
Add a photo to this gallery

The following links all redirect to this page.

Retrieved from "https://headhuntershorrorhouse.fandom.com/wiki/Edward_Hyde?oldid=188874"
Community content is available under CC-BY-SA unless otherwise noted.