David is a fictional vampire and one of the main antagonists from the 1987 action/horror film The Lost Boys. He was played by actor Kiefer Sutherland in one of his first major film roles.

David was a minor character featured in the 1978 predatory animal film Piranha. He was played by actor Roger Richman. David and his girlfriend Barbara Randolph went hiking through the woods as part of a personal camping getaway. They came upon an old, closed down military testing site, which included a large pool. Sneaking into the restricted area, Barbara suggested they should go swimming to clean off before climbing into their sleeping bags. David was concerned that the site might have been a sewage treatment plant. The choice was taken away from him however when Barbara pushed him into the water. She dove in after him, but suddenly David felt something nipping at his leg. He thought Barbara had bitten him, but in truth, it was a school of mutated piranha fish. Attracted by the blood, more piranha swarmed in and killed him. They then killed Barbara shortly thereafter.

David was the illegitimate son of Damon Ballard. Damon's father - a wealthy and powerful businessman, wanted nothing to do with a "commoner", and wanted Damon's mistress to abort the child. She had the child and tried to bring a paternity suit against Damon, which his father made disappear through his contacts in the judicial system. Ten years later, the mother sent a photograph of herself and her son to Damon, then committed suicide. The boy drowned in a bath tub shortly thereafter. David's ghost blamed Damon for abandoning them, and took his revenge by tormenting Damon's second son, Michael Ballard. Damon finally apologized to the spirit, and begged him to leave his son alone, insisting that he should take him instead. David's spirit agreed to this, and took Damon body and soul into the afterlife. (Poltergeist: The Legacy: Sins of the Father) 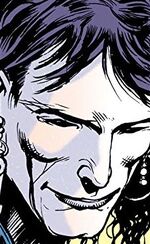 Dave was a motorcycle-riding vampire responsible for turning five young women into vampires as well. Dave was not only their master, but operated as their pimp as well, sending them out to procure fresh victims for him. None of the vamps were allowed to feed without first providing for their master. Ultimately however, they grew tired of this practice. In 1994, the Vamps decided to fight back. After watching Dave engorge himself on the blood of some bikers, they ambushed him, tying his limbs to four separate motorcycles, then speeding off, tearing his body limb from limb. The Vamp known as Howler then pounced upon his torso, driving a wooden stake into his heart. They buried the remains in separate shallow graves in the hills of North Carolina.

David was resurrected however, and returned to get revenge against his former brides, particularly Howler. He tracked Howler to the foster home of her son Tommy and engaged in a brutal throw down with her. He tried stabbing Howler with a broken sofa leg, but Howler evaded the blow, biting off a piece of David's face. David's other former bride, Mink, appeared outside the window of the house and fired a crossbow bolt that pierced David's heart. While incapacitated, the vamps dismembered him and packed his remains into five separate backpacks to be disposed of later.

Retrieved from "https://headhuntershorrorhouse.fandom.com/wiki/David?oldid=263068"
Community content is available under CC-BY-SA unless otherwise noted.