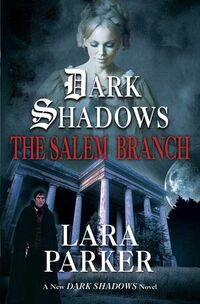 Dark Shadows: The Salem Branch is an American novel of the supernatural drama genre and is based on the original 1966-1971 daytime Gothic soap opera, Dark Shadows. It was written by Lara Parker, who played Angelique Bouchard on the show, and is her second novel in the Dark Shadows series. The novel was published by Tor Books released on July 11th, 2006. It was re-issued in paperback form on April 10th, 2012. The events of the series take place after the events of the television show.

Retrieved from "https://headhuntershorrorhouse.fandom.com/wiki/Dark_Shadows:_The_Salem_Branch?oldid=163071"
Community content is available under CC-BY-SA unless otherwise noted.