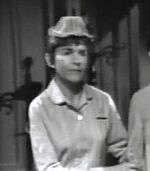 Jackson, first name unknown, was a nurse at Windcliff Sanitarium. She worked for Doctor Julia Hoffman. When Maggie Evans was remanded to Windcliff, Nurse Jackson attended her. Following a consultation with Doctor Dave Woodard, Julia asked Nurse Jackson (whom she referred to as Miss Jackson) to bring Maggie to her office. (DS 276)

James Blair was an investment banker from New York. He became associated with Burke Devlin, who had launched a scheme to financially destroy the Collins family. Blair met with Devlin at the Bangor Pine Hotel to discuss the Collins family holdings. Blair told Devlin that the family manor, Collinwood, was too much of a liability to be mortgaged and as such its property tax was reduced. (Dark Shadows: 42)

Jamison Collins was a member of the wealthy Collins family of Collinsport, Maine and lived at the Great House at Collinwood during the late 19th century and early 20th century. Jamison was the son of Edward Collins and Laura Collins. He had a sister named Nora Collins. He was closest to his uncle Quentin Collins however, who regarded Jamison like a son. As an adult, Jamison wed and gave birth to the modern Collins family. He is the father of Elizabeth Collins Stoddard and Roger Collins and the grandfather of Carolyn Stoddard and David Collins. Although Jamison was the son of Edward Collins, he actually favored his young uncle, Quentin. He looked to Quentin as both a father figure and a friend, and was willing to do nearly anything Quentin asked of him. Jamison was very distraught when Quentin left Collinwood in 1896. A year later, Quentin returned and brought Jamison a gift - a toy sailing vessel. Jamison's aunt, Judith Collins, did not have a good relationship with her brother at all and wanted him to leave Collinwood. She knew that if Jamison wanted him to leave, he would agree to go. She tried to manipulate Jamison into asking Quentin to go, but Jamison refused. (DS 702)

An insane Dirk Wilkins met up with Jamison at the Collinwood caretaker's cottage and told him about Barnabas Collins and the secret he kept in the basement of the Old House. (DS 769) Jamison sneaked in there on his own and discovered Barnabas' coffin. Running back to Collinwood, he told his father that Barnabas was a vampire. Edward humored the boy and went to the Old House to investigate Jamison's accusations. Barnabas however, took measures to keep his secret from him. (DS 770) 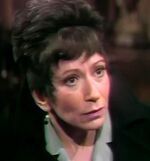 Janet Findley was a psychic medium and a colleague of Professor T. Eliot Stokes. In 1968, Stokes contacted Findley regarding strange occurrences taking place at Collinwood mansion. He brought her to Collinwood and introduced her to Elizabeth Collins Stoddard, who believed that a malevolent supernatural entity was present in the home. The feelings originated with a bizarre séance that took place in the house only a few nights earlier.

Madame Findley conducted a psychic analysis of the house and immediately determined that there was in fact a ghost present. She spent several hours trying to communicate with the spirit, to understand why it was bound to this location.

What Findley didn't know at the time was that the spirit belonged to a 19th century family member named Quentin Collins. Quentin's ghost had been manipulating two children living in the house to facilitate his own revenge against the Collins family. Using David Collins and Amy Jennings as the instruments of his wrath, he lured Madame Findley into a secret stairwell that led into a hidden room in the West Wing of the house. Quentin's ghost locked Findley inside the room for several hours, ultimately driving her to despair. When it finally let her go free, Findley shambled down the corridors of the house, not saying a word.

Elizabeth and the children found Madame Findley at the top of the stairs leading from the main foyer. They called out to her, but she did not responds. Suddenly she collapsed, tumbling down the stairs and breaking her neck. The coroner's report ruled her death the result of a heart attack. 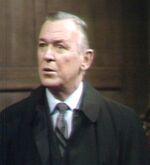 Mister Jarret was the manager of a funeral home in Collinsport, Maine. In 1968 he received notification from an unknown individual at Collinwood, stating that the family matriarch, Elizabeth Collins Stoddard had died and that the family would like to make arrangements.

Mister Jarret came to the great house at Collinwood and spoke with the family's maid, Mrs. Johnson. She brought him into the drawing room where he also spoke with Barnabas Collins. Both Barnabas and Mrs. Johnson were surprised by his arrival and assured him that nobody from the family proper called to make specific arrangements.

What Mister Jarret never learned was that the call had been placed by young David Collins, who was being manipulated by the ghost of his own ancestor, Quentin Collins.

Jenny Rakosi lived during the latter half of the 19th century. She was the sister of Magda Rakosi and the wife of Quentin Collins. She had two children by Quentin, but eventually went insane. Judith Collins had Jenny locked up in the Collinwood tower room. She secretly had Beth Chavez feed her meals, though no one else at Collinwood knew that Jenny was there. 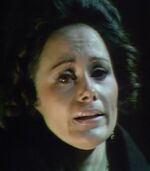 Joanna Mills was an employee of Randall Drew from Maine in the mid 19th century. She was the sister of Daphne Harridge and the lover of Quentin Collins, who was a married man and the husband of Samantha Collins, who also happened to be Randall Drew's sister. Yeah, it's a soap opera... you know how these things go.

Ever the jealous and embittered wife, Samantha Collins murdered Joanna by pushing her off of Widows' Hill in November of 1839. Like everyone who takes a leap off that damned hill, Joanna's spirit returned as a ghost to expose Samantha in her murder.

Jonah Collins was born in 1840, presumably in Collinsport, Maine and died on June 15th, 1863 at the age of twenty-three. He was buried at Eagle Hill Cemetery, very close to the Collins family mausoleum.

In 1968, Roger Collins and Elizabeth Collins Stoddard visited the cemetery and paused briefly to take note of Jonah's grave. Elizabeth, already feeling excessively maudlin at the time, made a comment about all of the lives that had been left unfulfilled. She believed that the dead were envious of the living. (DS 614)

Retrieved from "https://headhuntershorrorhouse.fandom.com/wiki/Dark_Shadows/J?oldid=238633"
Community content is available under CC-BY-SA unless otherwise noted.