The caretaker was an elderly man whose real name is unknown. He worked the night shift at Eagle Hill Cemetery as it's groundskeeper. The old man was a superstitious individual and was convinced that "evil spirits" and the ghosts of the dead haunted the tombs within the gates of the cemetery. One one occasion, he happened upon the Collins family mausoleum shortly after vampire Barnabas Collins re-emerged in the year 1967. Though he was not privy to the exact nature of the events going on, the caretaker was aware that something supernatural had been taking place on those hallowed grounds.

By 1897, Edith Collins was very old and in failing health. For many years, she was the caretaker of a dark family secret that had been handed down to her by father. The secret was that a Collins family ancestor - Barnabas Collins, had been made a vampire and was entombed in a secret room in the Collins family mausoleum.

Nearing the end of her life, Edith Collins spent most of her days bedridden. She had befriended a gypsy fortune teller named Magda Rakosi, who would read Edith's fortune with Tarot cards. Edith considered Magda her spiritual advisor and allowed the woman and her husband, Sandor, to habitate in the falling ruins of the Old House.

Though frail in health, Edith was still very much sharp in mind. She determined that she would pass along the family secret to the oldest living grandson, Edward Collins. Edith's youngest grandson, Quentin Collins, returned to Collinwood after traveling abroad for a year. When he heard that his grandmother was on the verge of dying, he attempted to make peace with her in the hopes that she would leave him a suitable inheritance. Quentin tried to charm Edith, but she never forgot the rotten soul that inhabited her grandson. [1] 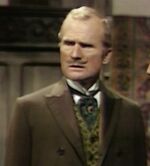 Elizabeth Collins Stoddard was the matriarch of the Collins family that lived in the town of Collinsport, Maine during the 1960s and 1970s. Along with her brother Roger, she ran the family business which consisted of a fishing fleet and cannery.

Elizabeth was the daughter of Jamison Collins and was born in the year 1917. In the 1940s, she married a man named Paul Stoddard who came to live at Collinwood with Liz. Paul's close friend and confidante, Jason McGuire, insinuated himself into the family and attempted to befriend Liz, but she was never able to completely trust McGuire.

In the winter of 1947, a young girl named Victoria was born. The identities of her parents were unknown, but she was left at the threshold of the Hammond Foundling Home in New York with a note pinned to her that read, "Her name is Victoria. I cannot take care of her". Victoria received an envelope containing $50.00 every month until she reached adulthood. The envelopes bore a Bangor, Maine postmark. Though it has never been satisfactorily confirmed, it has been speculated that Victoria was the illegitimate child of Elizabeth Collins Stoddard. [2]

In 1949, Elizabeth was pregnant with Paul's child. One evening, Paul and she had an intense argument, which resulted in Liz bashing her husband across the back of the head. She believed that she had killed him when in fact, he was only stunned. Liz ran from the room frightened, leaving Jason McGuire to clean up the mess. Jason helped Paul to his feet and convinced him to leave Collinwood. He told Liz that Paul had died and fabricated a story about burying his remains in the basement of the house. McGuire was now in a position to blackmail Liz for anything that he wanted, though he would wait nearly twenty years to call in that marker.

Fearful of her greatest secret being exposed, Liz became a recluse, refusing to ever leave the estate. She fired the entire house staff, keeping only a cook, Sarah Johnson and a groundskeeper named Matthew Morgan. That same year, her daughter Carolyn was born. Carolyn grew up believing that her father had abandoned the Collins family, which was actually the truth, but Liz reinforced the story so she would never suspect that she may have actually murdered him.

In 1966, Elizabeth's brother Roger sought to find a governess for his troublesome young son, David. Although they allegedly went through an agency, fortune sought to bring the now-adult Victoria Winters into their lives. Vicki came to Collinwood seeking a new life for herself outside the foundling home, but she always suspected that her true family origins lied within Collinwood. If there was any true family connection between Victoria and the others, Elizabeth never gave any indication of it. Vicki's stay at Collinwood was off to a rocky start, but within time, she acclimated to the Collins' eccentricities and became like a true daughter to Elizabeth.

The following year, Jason McGuire came back into Elizabeth's life. Accompanying him was a mousy seaman named Willie Loomis. In need of money, Jason began blackmailing Elizabeth into letting him stay at Collinwood. He pretended to act as a dear friend, but always reminded her of the secret locked inside the basement.

For several months Jason inveigled his way into every aspect of the Collins lifestyle. Willie and he began living at Collinwood and he extorted Liz for money, a management position at the family business and even a proposal of marriage. The rest of the family members knew that Jason had some sort of hold over Elizabeth, but she remained ever tight-lipped about the nature of her relationship, exclaiming that every decision she has made has been of her own free will.

The time eventually came when Roger, Carolyn and the others could no longer sit idly by and do nothing. They knew that Jason's hold over Elizabeth was directly tied to a secret within the basement. They discovered the trunk which allegedly contained Paul Stoddard's remains. When they opened it, no body was to be found. The truth was out and it became known that Paul Stoddard left Collinsport more than eighteen years ago. Roger Collins ordered the sheriff's department to arrest Jason McGuire, who fled the scene. Though Liz would never know it, Jason met his ultimate end at the hands of Liz's "cousin", Barnabas Collins, a vampire, who murdered Jason and drank his blood.

Though Liz was now free of the dark secret that had haunted her all those years, she still remained at Collinwood, never leaving the property and only rarely moving from the great house itself.

Eric Lang was a scientist who was born sometime in the 1930s. When he was in his late forties, he was operating out of a laboratory in Collinsport, Maine. Eric Lang became obsessed with the concept of creating new life and committed all of his efforts towards developing the perfect human organism, which would be culled from body parts from cadavars. To this end, he hired an underling named Jeff Clark to steal bodies for him, which he would use in his experiments. 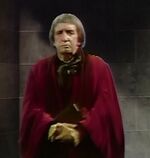 Ezra Simpson lived in Collinsport, Maine during the mid-late 18th century. According to Barnabas Collins, he was a "criminal and a traitor" who was condemned to hang for crimes of murder.

The ghost of Ezra Simpson was called forth by the spirit of Reverend Trask in 1968 to serve as judge on a mock ghost trial in which Trask sought to make Barnabas pay for the lives he had taken. After hearing the testimony of another ghost, Nathan Forbes, Judge Ezra Simpson silently condemned Barnabas and he was punished by being immured in the basement of the Old House. At the conclusion of the trial, Ezra's spirit disappeared back into the afterworld. [3]

Retrieved from "https://headhuntershorrorhouse.fandom.com/wiki/Dark_Shadows/E?oldid=223694"
Community content is available under CC-BY-SA unless otherwise noted.