Doctor David Woodard was a general practitioner of medicine, who worked out of a hospital in Collinsport, Maine during the late 1960s. In 1967, Doctor Woodard began examining patients who had fallen prey to a most peculiar series of injuries. The victims bore two puncture wounds in their throats and their bodies were practically drained of blood. The first such patient to come under Doctor Woodard's care was Willie Loomis. Later, Woodard began examining Maggie Evans, who exhibited similar symptoms. Doctor Woodard had no idea that both of these people had been the victim of a vampire. Unable to corretly diagnose their condition on his own, Doctor Woodard sought advice from a colleague from Windcliff Sanitarium, Doctor Julia Hoffman.

Sheriff Davenport replaced George Patterson as the Sheriff of Collinsport sometime in late 1969. In December of that year, an erratic Paul Stoddard was brought to the Collinsport police station by Professor Timothy Eliot Stokes claiming that his ex-wife, Elizabeth Collins Stoddard was "one of them". Sheriff Davenport took his statement, but he was released soon after.
Read more...

The corpse of Danielle Rogét was ultimately used as a template by scientist Eric Lang to create "Eve" - a potential mate for Adam, who ultimately went insane. 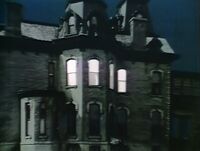 This was the laboratory of Doctor Eric Lang. It was here that he conducted an experiment to rid Barnabas Collins of the curse of being a vampire. With his assistant Jeff Clark procuring dead bodies for him, Lang constructed a humanoid repository through which he would drain the vampiric energy from Barnabas and transmit it safely into its new housing. Lang's creation, which came to be known as Adam, did not suffer the affliction of vampirism, but was mystically bonded to Barnabas Collins.

Retrieved from "https://headhuntershorrorhouse.fandom.com/wiki/Dark_Shadows/D?oldid=225318"
Community content is available under CC-BY-SA unless otherwise noted.