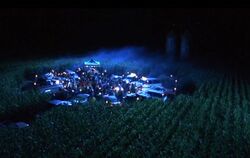 The corn field rave is an unofficial name for a fictional event relating to both the A Nightmare on Elm Street and Friday the 13th film franchises. It can be seen in the 2003 crossover film, Freddy vs. Jason.

In 2003, a teenager from Springwood, Ohio named Trey Cooper was brutally murdered by a masked serial killer whom local law-enforcement believed to be a Jason Voorhees copycat killer. Little did they know that the killer was in fact the real Jason Voorhees, who had been resurrected from Hell and guided by the efforts of the demonic dream entity, Freddy Krueger.

In the wake of Trey's death, several students at Springwood High School began organizing a rave to help them deal with the stress. As one partier named Bill Freeburg put it, "Safety in numbers", though in truth, he was probably just looking for an excuse to party.

The party was held outside at night in a large corn field adjacent to a farm silo. Students who attended the party included Lori Campbell, her best friend Kia Waterson, Trey's girlfriend Gibb Smith, a late-comer named Charlie Linderman, Lori's ex-boyfriend Will Rollins, a broad-shouldered jock named Shack and his teammate (among others).

Shack and his crony took pleasure in tormenting nerdy Charlie Linderman, who rode to the rave on his scooter. They tackled him to the ground, inserted a hose into his mouth and forced him to drink copious amounts of beer. After Linderman righted himself, he found Lori Campbell, who was talking with Kia. Charlie liked Lori and tried to comfort her, but Kia cock-blocked him, insisting that Lori needed some space. In contrast, Will Rollins came upon the scene (uninvited) and tried reconnecting with Lori.

Gibb Smith, highly inebriated, began stumbling about through rows of corn. She eventually passed out and began dreaming. In the dream, she saw the face of Trey Cooper beckoning towards the silo. In the real world, a bleached blonde partier named Frisell took note of Gibb's prone form upon the ground. Looking to make sure nobody was watching him, he mounted Gibb and began kissing her neck. In the dream world, Gibb entered the barn looking for Trey, but her boyfriend was no longer visible. The tableau changed around her, and the scenery became that of a massive boiler room. Freddy Krueger emerged and began tormenting Gibb, sending her running all through the building. She fell from a catwalk and scrambled to find a place to hide. Freddy scaled the walls of the building and cornered her in a locker. He was about to finish her off with his claws when something unexpected happened.

In the real world, Jason Voorhees had appeared and began massacring the revelers. Taking a broken piece of pipe, he impaled Gibb and Frisell (who was still on top of her), killing them both. Krueger was outraged that Jason took his kill away from him.

Some distance away from the beer line, Shack and his friend were getting wasted drinking hard grain alcohol and smoking marijuana. Shack sputtered about how "... this Everclear is kicking my ass". Jason Voorhees emerged from the corn rows and Shack and his friend began laughing at him. Mistaking him for some hillbilly farmer, they got in his face and called him "Jethro" and told him to go find "a pig to fuck". Jason responded by grabbing Shack's friend and twisting his head around until it faced backward. Shack threw the remaining Everclear onto Jason and shouted "Burn, motherfucker!" as he lit him up with a tiki torch. The alcohol caused flames to erupt all over Jason and Shack began running away. Voorhees took a flaming machete and hurled it at him, spearing Shack through the chest.

By this point, the rest of the ravers were aware of Jason's presence and chaos erupted. One partier threw a milk crate at him, believing that this would in some way stop him. Jason slashed through him with his machete and kept on advancing. Another partier threw empty plastic cups at him and paid for his idiocy in the same way the previous raver did.

When Lori, Kia, Will, Charlie and Bill Freeburg realized what was happening, they all piled into the van that Will had borrowed from his friend and drove off. Presumably, Jason continued his ruthless massacre. It is unknown how many more people he killed, and who may have survived.

Retrieved from "https://headhuntershorrorhouse.fandom.com/wiki/Corn_field_rave?oldid=136052"
Community content is available under CC-BY-SA unless otherwise noted.