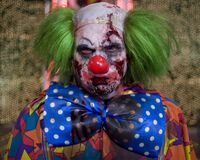 A clown is someone who likes to dress up in elaborate makeup and wear colorful clothes. Kinda like Boy George. As a professional occupation, a clown may be required to tell jokes, perform magic tricks or otherwise engage in general bufoonery. Some clowns may even perform in rodeos. A high school student who likes to play pranks or make a comedic spectacle of himself may be considered the "class clown". Clowns have also been represented as dolls and other types of merchandise.

Let's face facts though. Clowns are creepy-ass bastards. They are not cute. They are not funny. They are evil incarnate and exist solely to traumatize the youth of the nation, and perhaps even touch them inappropriately.

An evil supernatural entity took the form of a clown called Pennywise, which had a rough, gravely voice and wicked, pointed teeth. As the primary antagonist in the Stephen King mega-novel, It, the thing was responsible for the death of a boy named Georgie and also tormented other children in the town of Derry, Maine.

In the 1982 supernatural thriller Poltergeist, a little boy named Robbie Freeling had a clown doll that tried to kill him. The thing had long, extended arms and tried to strangle him in his bedroom late at night.

Clowns are also a popular design of Halloween costumes. On October 31st, 1963, six-year-old Michael Myers was wearing a clown costume on the night that he stabbed his sister Judith to death with a butcher knife. Twenty-seven years later, Michael's niece, Jamie Lloyd, wore a similar clown costume for Halloween. She too suffered a similar psychotic break and tried to murder her foster mother, Darlene Carruthers. Fortunately, Darlene survived and Jamie was given some much-needed psychological treatment.

In the early 1950s, a deranged and grotesque clown who called himself Twisty was seen committing murders and abductions in the town of Jupiter, Florida. The silent and emotionally disturbed killer seemed to have a soft spot for women and children, but was more than willing to slaughter male adults, either by stabbing them, beheading them, or beating them with a bowling pin. In 1952, Twisty murdered a young man named Troy Miller by stabbing him to death and abducted his girlfriend, Bonnie Lipton. He also abducted a young boy named Corey Bachman. Twisty later met an immature spoiled millionaire named Dandy Mott, who fancied himself Twisty's protégé.

Even the undead can be clowns. One such individual was turned into a zombie and shambled about the California amusement park Pacific Playland until it ran afoul of a frustrated youth named Columbus.

Retrieved from "https://headhuntershorrorhouse.fandom.com/wiki/Clown?oldid=241897"
Community content is available under CC-BY-SA unless otherwise noted.