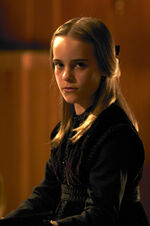 Charlotte is a fictional vampire and a recurring antagonist featured on the Spike TV television program Blade: The Series. Played by actress Emily Hirst, she was introduced in episode 1x05, "The Evil Within", and made six appearances in the series in total.

Charlotte was a vampire queen from England. In the mid-2000s, she journeyed to America to survey the progress that Marcus Van Sciver was making with the House of Chthon. During this time, she had an encounter with the vampire hunter, Blade.

Retrieved from "https://headhuntershorrorhouse.fandom.com/wiki/Charlotte?oldid=150786"
Community content is available under CC-BY-SA unless otherwise noted.