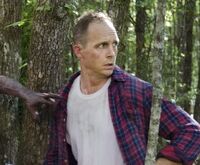 Carter was a resident of Alexandria, Virginia. Following the gruesome deaths of Pete Anderson and Reg Monroe, Carter felt that Rick Grimes and his group were too dangerous to allow them to remain in the community. He was also frustrated that Deanna Monroe seemed to give him carte blanche to whatever he needed. Carter conspired with several other members of Alexandria, including Tobin and Olivia, on a plot to kill Rick Grimes. Eugene Porter overheard their conversation, but his presence was detected and Carter readied his gun to kill him to insure secrecy. Rick, Daryl Dixon, and Morgan Jones entered the supply room at just the right moment. Rick disarmed Carter and placed the gun to his head. He decided not to shoot him however, and later told Morgan how much he really wanted to kill him.

Later, Carter was part of a team instructed to help others shore up access points outside the city, to herd the walkers to an alternate locale. A stray walker attacked Carter from behind a tree and began chewing on his face. Rick ran to his side while Morgan killed the walker. Unable to keep him quiet, Rick had little choice but to stab him in the back of the head, insuring that Carter would not come back as a walker. (WD: First Time Again)

Retrieved from "https://headhuntershorrorhouse.fandom.com/wiki/Carter?oldid=153533"
Community content is available under CC-BY-SA unless otherwise noted.