Cabin Fever is an American independent horror film of the viral outbreak subgenre. It is the first installment in the Cabin Fever film series. It was written and directed by Eli Roth and co-written by Randy Pearlstein based on a story treatment by Roth. The film was produced by Black Sky Entertainment and Deer Path Films. It was distributed through Lions Gate Entertainment and premiered theatrically in Canada on September 14th, 2002.

The year in film Edit

Other films that were released in 2002 include: 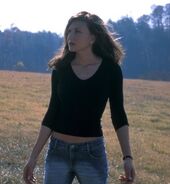 Retrieved from "https://headhuntershorrorhouse.fandom.com/wiki/Cabin_Fever?oldid=240083"
Community content is available under CC-BY-SA unless otherwise noted.