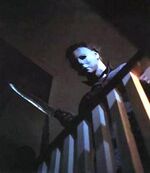 A butcher knife is a knife designed and used primarily for the butchering and/or dressing of animals. Other similar meat-cutting knives include the carving knife and the cleaver knife. The carving knife usually is designed for slicing thin cuts of meat and often has a blunt or rounded point, with a scalloped or granton blade to improve separation of sliced cuts of meat. The cleaver knife is similar to the butcher's knife, but has a lighter and thinner blade for precision cutting. A butcher knife is also a popular weapon of choice for serial murderers, owing largely to its light weight and the fact that it is easy to yield both in terms of slicing as well as stabbing. Killers such as Michael Myers and Chef Death are known to wield butcher knives.

Retrieved from "https://headhuntershorrorhouse.fandom.com/wiki/Butcher_knife?oldid=227293"
Community content is available under CC-BY-SA unless otherwise noted.