Variations include Bryan and Brion 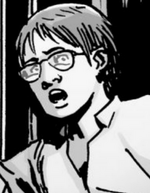 Brian was an American Caucasian male and a survivor of the zombie apocalypse. When he was approximately twelve-years-old, he was living in the U.S. state of Virginia and became a member of a community known as Hilltop Colony. Brian was routinely bullied by two older boys, Brandon Rose and the unidentified son of Mister and Mrs. Harlan. Brian was fleeing from the pursuing boys one evening when Sophia intercepted them and defended Brian. This cause the boys to turn their attention upon her, which incurred the wrath of Sophia's close friend, Carl Grimes. Carl beat the bullies mercilessly with a shovel.

Retrieved from "https://headhuntershorrorhouse.fandom.com/wiki/Brian?oldid=196457"
Community content is available under CC-BY-SA unless otherwise noted.