This bespectacled youth hailed from Boston, Massachusetts and was born around the year 2002. When he was nine-years-old, he caught sight of something no one his age should be exposed to - a grown naked-ass man skulking about his back yard. This clothing-optional individual was named Josh Levinson. Josh was a werewolf who had only recently awakened naked and bloody in a field. In need of clothing, he began poking through a clothes line in somebody's back yard. The little boy saw Josh snag a dress from the line, but said nothing. It was probably the most bizarre thing that had ever happened to him.

Children of the Corn[edit | edit source] 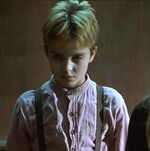 Retrieved from "https://headhuntershorrorhouse.fandom.com/wiki/Boy?oldid=158374"
Community content is available under CC-BY-SA unless otherwise noted.