"What's Blood Got to Do With It?" is the sixth episode of season three of the US version of the supernatural drama series Being Human and the thirty-second episode of the series overall. It was directed by Mairzee Almas and written by Kate Burns. It first aired on Syfy on Monday, February 18th, 2013 at 9:00 pm. In this episode, Sally Malik has a chance encounter with her brother, Robbie, knowing that reconnecting with him would only result in his death. Aidan comes clean to Kenny about his vampiric nature and reveals his origin to him. Sally goes to Donna Gilchrist for help and has to literally sacrifice her soul to save Robbie. Erin Shepherd conspires with Liam McLean to be his instrument of vengeance against the vampires - beginning with Aidan.

Sally has Max over at the house and he cooks her French toast. Their romantic interlude is made slightly awkward with the presence of Josh and Aidan. Aidan winges about how long Erin has been in the shower. Erin eventually comes downstairs, takes Aidan's food then sprays whipped cream directly into her mouth. Afterward, she tells them that the drain in in the shower is clogged up.

The doorbell rings and Sally nearly answers it before realizing that it is her brother, Robbie. Sally begins to panic and Josh and Aidan intercept him. Robbie tells them that his father has made him the landlord of the house and that he felt it was only proper to introduce himself. Sally listens behind the door, but she is terrified that any chance encounter with her brother might result in his death. Robbie tells them that he will return later to fix up some of the things in the house.

Aidan goes to work and makes excuses for his absence the last few days. Kenny gets right to the point and asks Aidan about being a vampire. Aidan scoffs and continues to act as if Kenny is just imagining things, but the boy knows the truth. He realizes that Kenny is not going to let this go.

Josh tries fixing things up around the house in the hopes that it will limit the amount of time that Robbie might be hanging out at should he return. He hears a noise in the basement and finds Erin skulking about. Erin is pondering where she will go when the next full moon rises, and Josh tells her that he will get her a storage unit next to Nora's. Erin does not care for this at all and the two begin snapping at one another.

At the funeral home, Max presses Sally about her issue with her brother and realizes that she is holding on to several secrets. Moreover, he is bothered by the fact that she seems comfortable sharing her baggage with Aidan and Josh, but not with him. Sally asks him to be a little patient with her, insuring him that things will get better.

At the hospital, Kenny offers Aidan a sample of his blood. Aidan stops keeping up the pretense of being anything other than a vampire. The boy asks him how he came to be this way, and Aidan says he didn't have a choice. He reflects upon the time when he was a colonial soldier during the American revolution. He encountered another soldier and was horrified to discover that he was a vampire. This was James Bishop. Aidan tried fighting him, but could not overpower the stronger opponent. Bishop offered to turn him into a vampire, but Aidan turned him down. However, Aidan agreed to accept Bishop's offer if it insured the continued survival of his men. Aidan's first victim, was one of his own men - a young soldier named Benjamin.

While on her way home from work, Sally inadvertently runs into Robbie outside the house. Robbie is shocked to see her still alive, and Sally is lost for words. She backpedals away from him, repeatedly saying, "I love you". She tells Josh about what had happened, and they decide that they need to get some help from Donna Gilchrist to resolve this.

Sally and Josh go to the Miller Avenue Community Kitchen. Though it is late at night, Donna Gilchrist is still working. Sally asks her to reverse the curse that kills everyone she encounters from her past, but Donna tells her the spell is binding. Desperate, Sally picks up a knife, but Gilchrist uses her magic to send Sally and Josh flying against the wall. Donna eventually lets them down. She says there is one way to help her. She can conduct a spell that will lift the prohibitions behind her resurrection, but in exchange, Donna wants her soul. Sally agrees with the deal.

The next day, Sally meets her brother outside the house. Robbie is actually living out of his van. The notion that he is a landlord was a money scam. His father doesn't even know where he is. Robbie turns the conversation around, asking why Sally's still alive. She maintains the idea that she had faked her own death. Robbie says that he is leaving Boston to pursue some plan that he has going on in Florida. Sally gives him sixty dollars and a big hug.

At the hospital, Kenny asks Aidan to turn him into a vampire. Aidan does his level best to point out all of the reasons as to why that would be a terrible idea. He warns him that he would have to leave behind everyone he ever loved forever. Kenny retorts by saying that come next year when he turns eighteen, he is going to walk out of that hospital - even if it kills him.

Sally goes to back to work and has a heart to heart with Max. She apologizes for how elusive she's been of late, and promises that she fixed everything. Max is a little cold towards her, but accepts her apology, and even volunteers to take her to a discotheque (providing such an animal even exists anymore). Failing that however, he at least agrees to take her out to breakfast.

Meanwhile, Erin conspires with Liam McLean. Liam is determined to kill Aidan. At Liam's urging, Erin takes some of her own werewolf contaminated blood and mixes it with Aidan's food supply. When Aidan returns home and takes a phial of blood out of the refrigerator, Erin secretly watches him drink it. Aidan begins to convulse uncontrollably and Erin pounces upon him, holding a sharpened wooden table leg above his heart.

Headhunter's Horror House Wiki has a collection of images related to Being Human: What's Blood Got to Do With It?. 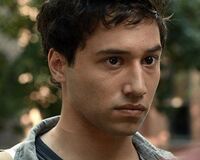 Retrieved from "https://headhuntershorrorhouse.fandom.com/wiki/Being_Human:_What%27s_Blood_Got_to_Do_With_It%3F?oldid=247395"
Community content is available under CC-BY-SA unless otherwise noted.