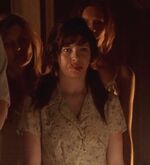 Becky was a young underage girl from Hotshot, Louisiana. She was a werepanther and a member of the Norris family. Becky was present when Luther told the clan the story of how Ghost Daddy and Ghost Mama came together to create the werepanthers. As their breed was dying out, they needed new offspring. Felton Norris had abducted the human Jason Stackhouse and infected him with the werepanther bite in the belief that he would become a werepanther. His purpose was to serve as the new Ghost Daddy and breed with all of the female members of the family, including Becky. Jason refused to take advantage of someone as young as Becky, and fortunately, he was able to escape before he could be forced into having sex with her.

Retrieved from "https://headhuntershorrorhouse.fandom.com/wiki/Becky?oldid=170682"
Community content is available under CC-BY-SA unless otherwise noted.