Shaun of the Dead[edit | edit source]

Barbara was a middle-aged woman who lived in England. She was the mother of a young man named Shaun and her second husband was a grumpy sort of guy named Philip. Shaun loved his mother dearly, but despised Philip. In fact, in a vain effort to turn his mother against his stepfather, he lied and told her that Philip had touched him inappropriately. Barbara didn't buy it however. When a zombie apocalypse broke out, Shaun and his best mate Ed took their car to Barbara's house to collect her. Unfortunately, they had to take Philip as well. Their plan was to regroup with some friends and take up shelter at a local pub called The Winchester. Along the way, Philip was infected and turned into a zombie, and they had to leave him. In order to evade the zombie hordes, the group had to pretend to be undead. Barbara, ever the ditz, was unaware of this, but managed to blend in with the zombies through her own sheer aloofness. They reached the Winchester, but at some point, Barbara was bitten and became infected. Shaun tried to share some tender final moments with his mum, but this came to a stark end, when a member of their group named David, abruptly put her down. (Shaun of the Dead) 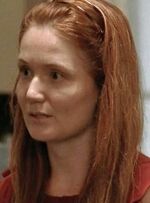 Barbara was a Caucasian woman in her mid to late thirties with auburn hair. She was a resident of the Alexandria Safe-Zone in Alexandria, Virginia. Barbara often attended most community functions, but rarely took a measured position on any one issue. She usually flitted around the background, hobnobbing with other residents. Barbara bore witness to some of the more memorable events to take place in Alexandria. She attended Deanna Monroe's party welcoming Rick Grimes and his group into town. She was present for the accidental murder of Reg Monroe and the subsequent execution of Pete Anderson. When walkers broke through the barriers into the town, Barbara took up arms to defend her home, killing several zombies, and retreating to the infirmary after the streets had been cleared. Barbara was present at another town council meeting following Rick and his group's most harrowing battle with the Saviors. She listened as Rick told them that he was no longer their leader, and they now had to follow the orders of Savior leader, Negan.

Retrieved from "https://headhuntershorrorhouse.fandom.com/wiki/Barbara?oldid=247008"
Community content is available under CC-BY-SA unless otherwise noted.