Ari Lehman is an American actor and musician born in Brooklyn, New York on May 2nd, 1955. Although his acting credits are minimal, Lehman distinguishes himself as being the first person to ever play the role of masked serial killer Jason Voorhees. At fourteen-years-old, Lehman played young Jason Voorhees in the flashback and dream sequences of the 1980 film Friday the 13th. As an adult, Lehman abandoned film to pursue a career in music. He has appeared in several documentary specials devoted to the franchise and returned to acting in 2006, playing roles in low-budget venues such as ThanXgiving, Hell-ephone and the comedic Terror Overload. 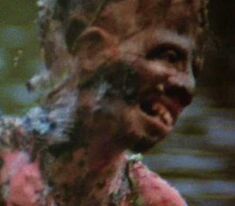 Retrieved from "https://headhuntershorrorhouse.fandom.com/wiki/Ari_Lehman?oldid=254732"
Community content is available under CC-BY-SA unless otherwise noted.