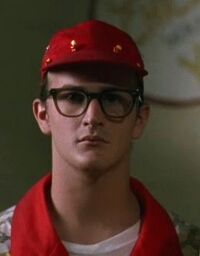 Andy was a young man with eyeglasses and a ponytail who worked at the Chunky Chicken fast food eatery. He was an employee of Mister Peterson and a co-worker of Mark Wayne. Andy was often the subject of Mark's verbal barbs, and even customers such as Charnetski the security guard offered him little in the way of respect, calling him names like Hammerhead. When Peterson spoke to Mark about his bad behavior, Andy jumped in, tattling on Mark and telling Peterson that Mark was being abusive towards him. 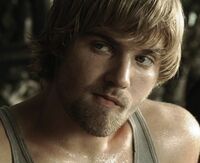 Andy was a young, blonde-haired man who grew up during the 1960s and 1970s. In August, 1973, Andy and his friends, Kemper, Erin and Morgan took a vacation to Mexico. The real purpose behind this journey was to purchase two pounds of marijuana, which they intended on selling in the United States (presumably). They got the drugs through customs by concealing it within a pinata. On their way back from Mexico, Andy and the others were passing through El Paso, when they picked up a hippie hitchhiker named Pepper. Pepper immediately found herself attracted to Andy and the two spent the majority of the ride making out in the back of Kemper's van.

The next leg of their journey involved driving too see the southern rock band Lynyrd Skynyrd in concert, for which they had front row seats. Unfortunately, for all of them, they never made it to the concert. While driving through the town of Fuller in Travis County, Texas, they picked up a distraught young teenage girl whom they found stumbling down the road. The woman was suffering from exposure and dehydration and was rambling on about having escaped from the "bad man". When the woman realized that they were driving back towards the direction of her captors, she grew insanely hysterical, produced a .357 revolver from under her dress and shot herself in the head. The group pulled off to the side of the road to collect themselves and process what they had just seen.

Andy was a white male in his apparent early thirties. He was living in the U.S. state of Virginia during the years following the zombie apocalypse. He took up residence in one of the abandoned FEMA camps set up at the Hilltop Colony. The members of the Hilltop group were forced into a trade exchange with a group of radical survivalists known as the Saviors. In exchange for food and equipment, the Saviors would protect them from zombies. Andy was assigned as part of a food provision group, which also included people named Crystal and Ethan. Andy was present when Rick Grimes and his people, who had come from another community known as the Alexandria Safe-Zone, visited Hilltop. Ethan, who had been coerced by the Saviors' leader, Negan, into "sending a message", stabbed the Hilltop's leader, Gregory. He did this because the Saviors had captured Ethan's brother, Craig. A fight broke out, and Andy scuffled with one of Rick's group, Abraham Ford. Andy got the upper hand on Abraham and began choking him until Daryl Dixon grabbed him from behind and broke his hand. Andy turned to see Rick Grimes stab Ethan to death. (Walking Dead: Knots Untie)

Andy then assisted Rick's group in a plot to recover Craig from the Saviors. They faked Gregory's death, and used a walker head as their "proof of death". They went to a Savior outpost, where Rick and Daryl negotiated the trade. Andy helped Craig out of the compound and brought him back to Hilltop. (Walking Dead: Not Tomorrow Yet)

A few weeks later, two more members of Rick's group, Maggie Greene and Sasha Williams, took up residence at Hilltop. In short order, many of the Hilltop residents began favor Maggie's leadership qualities over Gregory's. When Rick's group returned with an offer to form an alliance with the colony to fight the Saviors, Andy was one of the people who threw his support behind Rick's initiative. (Walking Dead: Rock in the Road)

Retrieved from "https://headhuntershorrorhouse.fandom.com/wiki/Andy?oldid=205569"
Community content is available under CC-BY-SA unless otherwise noted.