Andrea was once a lawyer for the ACLU and the older sister of Amy. They were living in Florida during the time when the zombie apocalypse spread across the eastern United States. Andrea and Amy were found by an older man named Dale Horvath, who took them in and they rode with him north in his RV. They eventually became part of a larger group that had shored up at a rock quarry campsite just outside of Atlanta, Georgia. A man named Shane Walsh had taken on the role of leadership of the survivors, but Shane's position shifted when Rick Grimes became a part of the group. Andrea didn't think much of Rick, having first encountered him in a department store in Atlanta. Andrea suffered great emotional trauma when a herd of walkers invaded the camp, biting her sister. Andrea waited for Amy to turn, then put her out of her misery.

The group were later forced to abandon the rock quarry, and they made their way to the CDC headquarters in Atlanta. Despondent and emotionally broken, Andrea wanted to take her own life, but Dale Horvath wouldn't allow it. She grew bitter at him for denying her this decision, and resented him for several more weeks.

The group eventually made their way to the Greene farm, owned by an elderly veterinarian named Hershel Greene. During this time, Shane grew more aggressive and violent towards Rick's leadership, even going so far as to assert that he was a threat to the group. As the rift between Rick and Shane deepened, she took towards siding with Shane. Shane began training Andrea in the use of firearms, and their relationship grew into a "friends with benefits" dynamic. Andrea accidentally shot Daryl Dixon in the head, mistakenly believing him to be a walker. Darryl survived the grazing shot, and forgave Andrea, understanding that she was only trying to protect the group.

A large herd of walkers broke through the fences and barriers surrounding the farm, ultimately starting a fire in Hershel's barn. The group scattered and raced to evacuate, and Andrea was separated from the others. She was discovered by a katana-wielding dark-skinned woman named Michonne, who had two walker attendees with her own chains. Michonne took care of Andrea through the winter, and nursed her back to health when Andrea grew ill.

As spring came along, Andrea and Michonne made their way to a community called Woodbury. The leader of the community was a man named Philip Blake, whom everyone else referred to as the Governor. Andrea was ready to settle down and become a resident at Woodbury, but Michonne distrusted the governor. Through the governor's actions, Andrea was able to reconnect with Rick's group, who were now holed up at the West Georgia Correctional Facility. The Governor perceived the people at the prison as a threat, and Andrea tried in vain to negotiate a truce between the two factions. During this time, she entered into a romantic relationship with the Governor. Things became heated as the Governor broached a firefight with the other group, but it grew even worse when the Governor went completely insane after Michonne impaled his zombie daughter, Penny, and took out his right eye.

Andrea eventually came to realize that Philip was insane and tried to escape. He pursued her all the way back to the prison and brought her back to Woodbury. Feeling as if she had betrayed him, he tortured her and locked her inside of a basement with his scientific assistant, Milton Mamet. Before leaving, he stabbed Milton multiple times and left him locked inside to bleed to death. His intent was that Mamet would return as a walker and kill Andrea. Mamet took some time to bleed out. However, he did succeed in providing Andrea with a pair of pliers, which she used to free herself. By this point however, Milton had died and was resurrected as a walker. Andrea finished him off by stabbing him in the head, but not before he bit her on the shoulder, ultimately resulting in Andrea's doom as well. Rick and the others burst into the room, but they were too late. Michonne stayed behind with Andrea, and shot her in the head before she could turn. 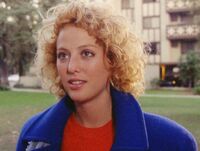 Andrea was a young woman who accepted a scholarship to an all-male boarding school. She discovered that the school harbors a bizarre secret as all of her fellow classmates appeared to be brainwashed emotionless drones, making them what some might consider as the perfect students. (Zombie High)

Retrieved from "https://headhuntershorrorhouse.fandom.com/wiki/Andrea?oldid=184808"
Community content is available under CC-BY-SA unless otherwise noted.