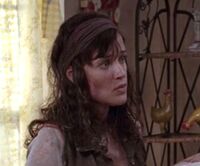 Ana is a fictional zombie victim and a minor character featured on the AMC survival horror series The Walking Dead. Played by actress Brina Palencia, she appeared in the fourth episode of season four, "Indifference".

Ana was a young woman living in Fulton, Georgia during the years of the zombie apocalypse. She met a man named Sam and the two became lovers. Alone and scared, they made their way through the world, and managed to survive on their own for the first few years. Ana and Sam came upon a greenhouse that had fresh fruit in it. While gathering food, they were attacked by walkers and forced to flee. Ana hurt her leg and Sam dislocated his right shoulder while trying to escape. They made it to a nearby farmhouse and took refuge in an upstairs bedroom. Two travelers named Rick Grimes and Carol Peletier came to the house and found them. Sam offered them an apple. They explained their story to Rick and Carol and Carol fixed Sam's shoulder. Ana was grateful to see other survivors and wanted to help out in any way she could. Rick was reluctant to trust her, but she pleaded with him to let her try. Ana and Sam went back out again towards the area of the greenhouse when they were set upon by walkers. Rick and Carol later came upon Ana's severed leg, and recognized it because of the tattoo that Ana had. They then spotted some walkers tearing through her innards on the side of the road. (Walking Dead: Indifference)

Retrieved from "https://headhuntershorrorhouse.fandom.com/wiki/Ana?oldid=184814"
Community content is available under CC-BY-SA unless otherwise noted.