"I've heard it said that the American dream is a thing of the past; that the basic tenants of home, job and family are slipping away. Well... not in my town. Where I come from that dream is still a reality. 'Course you have to know who's boss. For those who follow my lead life can be a paradise. But for those who don't... it can be a mighty rough road."
―Sheriff Lucas Buck 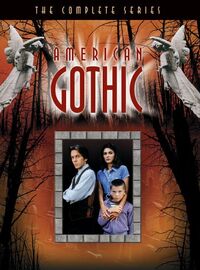 American Gothic was an American supernatural-themed television series that aired on CBS from September of 1995 to July of 1996. The series was created and produced by 70s teen icon and former Hardy Boy Shaun Cassidy. Only one season of the show was produced, totalling eighteen episodes, with four episodes that were never aired. The complete series of American Gothic was released as a Region 1 NTSC double-sided 3-disc set in the United States by Universal Studios on October 25th, 2005. It was also released as a Region 2 PAL single-sided 6-disc set in the UK on March 20th, 2006.

The events from the series took place in the small town of Trinity, South Carolina - a town not unlike any other, but for the occasional odd supernaturall occurance. The sheriff of Trinity is a man named Lucas Buck, a man with a genial outward appearance, but who possesses great power and the ability to manipulate others into fulfilling his dark goals. One of those goals includes laying claim to his illegetimate son Caleb Temple, a boy who is orphaned at the age of ten and communes with the ghost of his older sister Merlyn. Caleb is not without peer however and receives aid from the town physican Doctor Matt Crower and his reporter cousin Gail Emory.

Retrieved from "https://headhuntershorrorhouse.fandom.com/wiki/American_Gothic_(TV_Series)?oldid=200918"
Community content is available under CC-BY-SA unless otherwise noted.