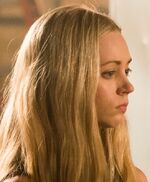 Amber is a fictional zombie holocaust survivor, and a recurring character featured in The Walking Dead comic book series published by Image Comics and Skybound Entertainment. She was first introduced in issue #105 in December, 2012. The character also appeared on The Walking Dead television series on AMC, where she was played by actress Autumn Dial. She first appeared in the seventh episode of season seven titled, "Sing Me a Song".

Amber is a young blonde haired woman who was living in the area of Virginia near Washington, D.C. in the years following the fall of society. She came to become a part of a militant group known as the Saviors and was one of the wives of the group's leader, Negan. Amber earned herself no small measure of displeasure when Negan learned that she had been sleeping with another Savior named Mark, who had apparently been her boyfriend, prior to her being conscripted to Negan's bed. Negan punished Mark for this effrontery by having his face disfigured with a hot iron. In the comics, Amber later encountered Alpha of the Whisperers, who decapitated her, and left her reanimated head on a pike. A member of the Hilltop Colony named Dante ultimately put her down.

Retrieved from "https://headhuntershorrorhouse.fandom.com/wiki/Amber?oldid=235281"
Community content is available under CC-BY-SA unless otherwise noted.