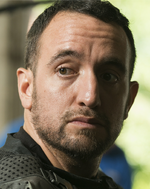 Alvaro was a man of Hispanic descent and a survivor of the zombie apocalypse. He became a member of a community called The Kingdom and served as a fighter under King Ezekiel. Alvaro also had history with Paul Rovia of the Hilltop Colony, and considered him a friend. Alvaro was one of the soldiers of the Kingdom and often wore protective body armor and rode about on a horse. He was often seen in the company of Richard. Alvaro and Richard were the first ones to spot Rick Grimes and his group when they first came to the Kingdom.

Alvaro is later shot by Gunther, a member of the Saviors, while attempting to usher an injured Ezekiel to safety and from a herd of walkers after the Kingdom's soldiers are ambushed by the Saviors in a firefight which kills many of their numbers.

Retrieved from "https://headhuntershorrorhouse.fandom.com/wiki/Alvaro?oldid=205570"
Community content is available under CC-BY-SA unless otherwise noted.